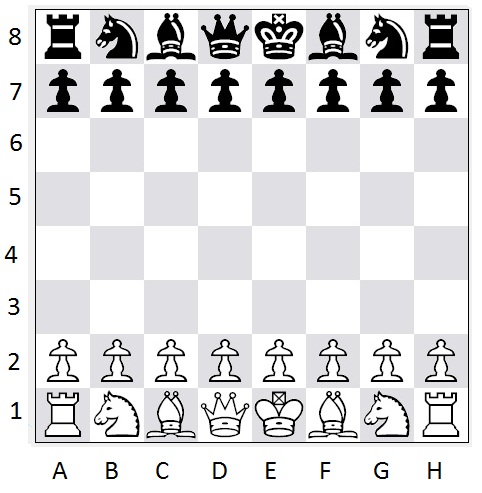 Chess is a one of the most famous board games, a game of two-player strategy played on a chessboard, a checkered gameboard with 64 squares arranged in an eight-by-eight grid. Chess is one of the world’s most popular games. People generally play chess at home, in clubs, parks, online, in tournaments, and by correspondence.

Each player begins the game with sixteen pieces: 1 king, 1 queen, 2 bishops, 2 knights, 2 rooks, and 8 pawns. Each of the six pieces types different moves. The pieces are used to attack, defend, and capture the opponent’s pieces, with a final objective: ‘checkmate’ the opponent’s king by placing it under an inescapable threat of capture. Also, the game can be won by the voluntary resignation of the opponent, which typically occurs when checkmate appears unavoidable, or if too much material is lost. A chess game may also have a draw result in several ways, where neither player wins. The course of the game is divided into three phases: opening, middlegame, and endgame.

Setup of the chessboard:

Chess can only be played on a square board of 8 rows, called ranks and denoted with numbers 1 to 8, and 8 columns, called files and denoted with letters from A to H, of squares. The colors of the sixty-four squares alternate and are referred to as “light” and “dark” squares. The chessboard should be placed with a light square at the right-hand end of the rank nearest to each player, and the pieces are set out as you can see in the photo, with each queen on a square of its own color. 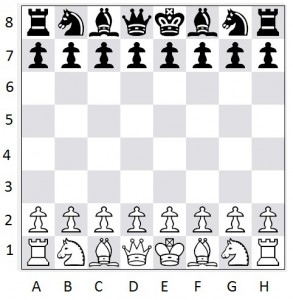 By convention, the pieces are divided into white and black sets. The players are referred to as “White” and “Black”, and each begins the game with sixteen pieces of the specified color. These consist of a king, a queen, 2 rooks, 2 bishops, 2 knights, and 8 pawns.

Movement of each piece:

First of all, we should mention that white always moves first. After the first move, players move by alternance one piece per turn. Pieces are moved to either an unoccupied square or one occupied by an opponent’s piece, which is captured and removed from play. With the sole exception of en passant, all pieces capture opponent’s pieces by moving to the square that the opponent’s piece occupies. A player may not make any move that would put or leave his or her king under attack. If the player to move has no legal moves, the game is over; it is either a checkmate if the king is under attack, or a stalemate (a draw) if the king is not.

The king moves one square in any direction. The king has also a special move which is called castling and involves also moving a rook. 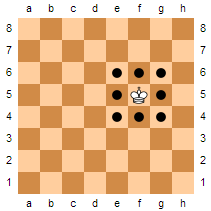 The rook can move any number of squares along any rank or file, but may not leap over other pieces. Along with the king, the rook is involved during the king’s castling move. 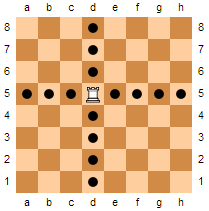 The bishop can move any number of squares diagonally, but may not leap over other pieces. 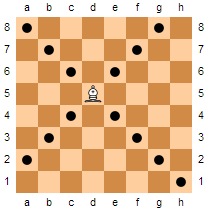 The queen can move any number of squares along rank,file, or diagonal, it combines the power of the rook and bishop, but it may not leap over other pieces as the knight can do. 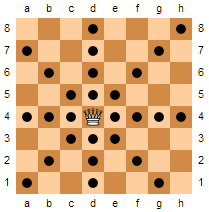 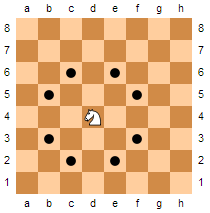 The pawn may move forward to the unoccupied square immediately in front of it on the same file, or on its first move it may advance two squares along the same file provided both squares are unoccupied; or the pawn may capture an opponent’s piece on a square diagonally in front of it on an adjacent file, by moving to that square. The pawn has two special moves: the en passant capture and pawn promotion. 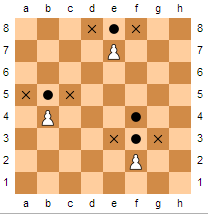 Special notation is used to record chess games and positions,  most often algebraic chess notation.  Abbreviated (or short) algebraic notation generally records moves in the format “abbreviation of the piece moved – file where it moved – rank where it moved”. For example, Qg5 means “queen moves to the g-file and 5th rank” (that is, to the square g5). If there are two pieces of the same type that can move to the same square, one more letter or number is added to indicate the file or rank from which the piece moved, e.g. Ngf3 means “knight from the g-file moves to the square f3”. The letter P indicating a pawn is not used, so that e4 means “pawn moves to the square e4”.
If the piece makes a capture, “x” is inserted before the destination square. Thus Bxf3 means “bishop captures on f3”. When a pawn makes a capture, the file from which the pawn departed is used in place of a piece initial, and ranks may be omitted if unambiguous. For example, exd5 (pawn on the e-file captures the piece on d5) or exd (pawn on the e-file captures a piece somewhere on the d-file).

“Scholar’s mate”
If a pawn moves to its last rank, achieving promotion, the piece chosen is indicated after the move, for example e1Q or e1=Q. Castling is indicated by the special notations 0-0 for kingside castling and 0-0-0 for queenside castling. An en passant capture is sometimes marked with the notation “e.p.” A move that places the opponent’s king in check usually has the notation “+” added. Checkmate can be indicated by “#” (occasionally “++”, although this is sometimes used for a double check instead). At the end of the game, “1–0” means “White won”, “0–1” means “Black won”, and “½–½” indicates a draw. 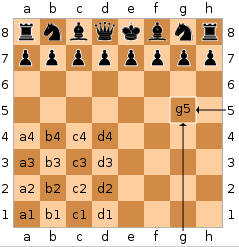 Chess moves can be annotated with punctuation marks and other symbols. For example “!” indicates a good move, “!!” an excellent move, “?” a mistake, “??” a blunder, “!?” an interesting move that may not be best, or “?!” a dubious move not easily refuted.

Phases of a chess game:

A chess opening (the “opening moves”) is the group of initial moves of a game . Recognized sequences of opening moves are referred to as openings and have been given names such as the Sicilian Defence  or Ruy Lopez . There are many types of chess openings, varying widely in character from quiet positional play  to very aggressive . In some opening lines, the exact sequence considered best for both sides has been worked out to more than 30 moves. Professional players spend years studying openings and continue doing so throughout their careers, as opening theory continues to evolve.
The fundamental strategic aims of most openings are similar:
Development: This is the technique of placing the pieces (particularly bishops and knights) on useful squares where they will have an optimal impact on the game.
Control of the center: Control of the central squares allows pieces to be moved to any part of the board relatively easily, and can also have a cramping effect on the opponent.
King safety: It is critical to keep the king safe from dangerous possibilities. A correctly timed castling can often enhance this.
Pawn structure: Players strive to avoid the creation of pawn weaknesses such as isolated, doubled, or backward pawns, and pawn islands – and to force such weaknesses in the opponent’s position.
Most players and theoreticians consider that White, by virtue of the first move, begins the game with a small advantage. This initially gives White the initiative. Black usually strives to neutralize White’s advantage and achieve equality, or to develop dynamic counterplay in an unbalanced position.

The chess middlegame is the part of the game which starts after the opening. There is no clear line between the opening and the middlegame, but typically the middlegame will start when most pieces have been developed. Because the opening theory has ended, players have to form plans based on the features of the position, and at the same time take into account the tactical possibilities of the position. The middlegame is the phase in which most combinations occur. Combinations are a series of tactical moves executed to achieve some gain. Middlegame combinations are often connected with an attack against the opponent’s king; some typical patterns have their own names; for example, the Boden’s Mate or the Lasker–Bauer combination.
Strategic themes or Specific plans  will often arise from particular groups of openings which result in a specific type of pawn structure. An example is the minority attack, which is the attack of queenside pawns against an opponent who has more pawns on the queenside. The study of openings is therefore connected to the preparation of plans that are typical of the resulting middlegames.
Another important strategic question in the middlegame is whether and how to reduce material and transition into an endgame (i.e. simplify). Minor material advantages can generally be transformed into victory only in an endgame, and therefore the stronger side must choose an appropriate way to achieve an ending. Not every reduction of material is good for this purpose; for example, if one side keeps a light-squared bishop and the opponent has a dark-squared one, the transformation into a bishops and pawns ending is usually advantageous for the weaker side only, because an endgame with bishops on opposite colors is likely to be a draw, even with an advantage of a pawn, or sometimes even with a two-pawn advantage.

The chess endgame (or ending  or end game) is the stage of the game when there are few pieces left on the board. There are three main strategic differences between earlier stages of the game and endgame:
During the endgame, pawns become more important; endgames often revolve around attempting to promote a pawn by advancing it to the eighth rank.
The king, which has to be protected in the middlegame owing to the threat of checkmate, becomes a strong piece in the endgame. It is often brought to the center of the board where it can protect its own pawns, attack the pawns of opposite color, and hinder movement of the opponent’s king.
Endgames can be classified according to the type of pieces that remain on board. Basic checkmates are positions in which one side has only a king and the other side has one or two pieces and can checkmate the opposing king, with the pieces working together with their king. For example, king and pawn endgames involve only kings and pawns on one or both sides and the task of the stronger side is to promote one of the pawns. Other more complicated endings are classified according to the pieces on board other than kings, such as the “rook and pawn versus rook endgame”.