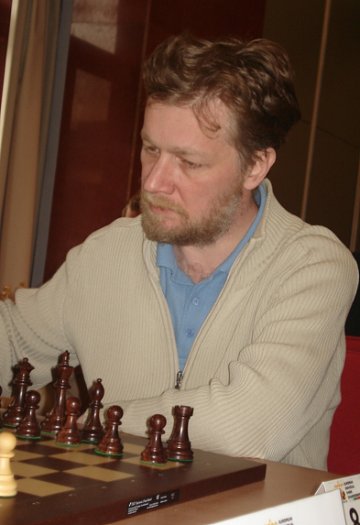 Most parents dream about what their children will grow up to be.  Some even provide them with training at a young age in order to encourage them to develop in a particular field.  But in most cases these efforts do not go very far. Their children simply do not have the innate talents and gifts needed to excel in that particular area.  But there are exceptions.  One example is Alexander Valeryevich Khalifman.

Alexander Khalifman may not be a household name in most homes around the world, but he is known to chess enthusiasts.  He was born on January 18, 1966, in Leningrad, Union of Soviet Socialist Republics, to Jewish parents.  Starting at the tender age of six, he was taught by his father how to play chess. The elder Khalifman was an amateur, but his efforts paid off.  This was clearly a game that appealed to the young boy.  As time went on, Alexander worked with professional trainers, including Vassily Mikhailovich Byvshev and Gennady Efimovich Nesis.  He attended chess training classes at the Pioneer Palace. Ten years after he began playing chess, he won his first major championship, the Soviet Union Youth Championship.  He repeated this same accomplishment two years later.

In between chess tournaments, he studied at the Leningrad State University, Faculty of Mathematics and Mechanics, but he didn’t complete his studies due to a conflict with the dean re: his participation in a chess tournament. He ended up being compelled to serve in the Soviet army for two years.

Meanwhile, he continued to win chess tournaments, within Russia and around Europe and then around the world.  In 1985, he was named the youth chess champion for Europe.  And in 1986 he achieved International Master status.  He won at Dordrecht in 1988.  In 1990, his career in chess was further elevated when he became a Grand Master at the New York Open.  He came in first place in London in 1991.  He participated on the Russian team in the International Chess Olympiad, winning in 1992, 2000 and 2002. Some associates began to call him by the nickname El Khalif.

The highlight of his career as a chess player came in 1999.  He won the FIDE (World Chess Federation) World Championship Knockout Tournament in Las Vegas, defeating Vladimir Akopian in the final. He became the 14th FIDE world champion. He was rated 44th worldwide, which created a controversy with some critics.  After his win, Khalifman proudly stated, “I always knew that someday I would be first.”  Unfortunately he lost the title the next year in New Delhi in a match against Viswanathan Anand.

Alexander Khalifman continues to play in chess tournaments to this day but is concentrating his skills and efforts more on educating others than on practical play.  The highest FIDE rating he achieved was 2702 in October 2001, January 2003 and April 2003.

In November 1998, a year before he won the FIDE World Championship match, he opened the Grandmaster Chess School in St. Petersburg, Russia.  During an interview with Crestbook, Khalifman noted the importance of chess in education, and especially for the young.  “Chess is fairly unique for the precise reason that it teaches you to think.  Most subjects taught in school only weigh your memory down with information, without giving you the skills of independent mental work.  Even the solution of physical or mathematical problems most of the time can be reduced to one standard algorithm or another.  But chess teaches you to think, and not only that, it does so in a playful form that is very natural for children.  And at the same time, it brings you face to face with a very concrete result – either you win or you lose.”  If Khalifman had his way, chess would likely be a standard component of school curriculum.

Alexander Khalifman has poured his knowledge of and admiration for chess into writing.  He has written a number of books and articles on the subject.  His chess-related books include the Opening for White According to Anand series, the Opening for White According to Kramnik series and Opening for Black According to Karpov.  Other books he has worked on include Mikhail Chigorin: The First Russian Grandmaster, games reviews of Mikhail Botvinnik, Alexander Alekhine, Jose Raul Capablanca.  He co-authored with trainer Gennady Nesis Tactics in the Grunfeld Defense and Tactics in the French Defense.

Gennady Nesis wrote a book about the Grand Master titled Alexander Khalifman.  It was published in 2000 by Litera.  And a book co-authored by Nesis and Khalifman titled Khalifman: My Life and Games was published by Everyman Chess, also in the year 2000.

Alexander Khalifman has been developing the opportunities provided by the Internet to promote chess instruction to a larger audience in recent years.  His St. Petersburg Grandmaster Chess School has further expanded into a chess-focused website, GMchess Grandmasters Site.  This site provides an innovative GMChess channel that specializes in on-line training and evaluating user chess games through email submissions.  The site also provides chess-related articles and links.  Khalifman isn’t the only grand master involved with the project; he is aided by other grand and international masters.

The motto of the Grand Master Chess School is “chess=intellect + character”.  According to Khalifman, in an interview with Chess News, the translation of this phrase is that “chess is a unique game that helps a person, especially in childhood, to develop harmoniously.”

Although he doesn’t delve into his personal life too much, Alexander Khalifman is married.  He and his wife have one daughter (who does not play chess!).