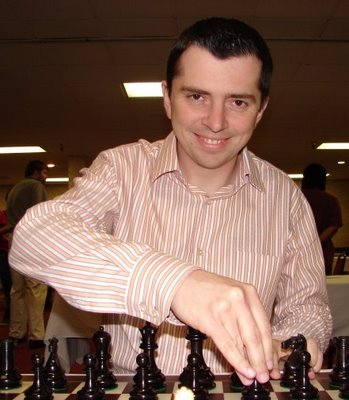 Alexander Onischuk’s full name is Олександр Онищук. His official title is that of a Grandmaster (GM).  He was born in Sevastopol in Crimea, Ukraine on September 3, 1975. For almost two decades now, since July 1994, he has been in the top 100 players of the world. His rank slipped briefly to 107 in July-September 1995.

He migrated to the US in 2001 on a diversity Visa and became a US national. Here, he accepted a chess scholarship offer from the University of Maryland, Baltimore country. He played for the championship college team for five years while studying linguistics and graduated in 2006 while leading the UMBC team through four consecutive collegiate championships from 2002-2006.

Alexander Onischuk has had a very notable professional chess player career. He started winning very early in his chess career.  He came in 2nd place in the World Youth Championship (under 16 championship) held in Brazil in 1991. He became the International Master in 1993. He then went on to become the Grandmaster in 1994 at the age of 19. Alexander was the gold medalist in the European Club Cup in 1997. He was the winner of the 2006 US Chess Championship and he refers to that day as the happiest day of his life. He has also won the World Team Championship twice as a gold medalist, the first time in 1997 and then again in 2010. He was also a part of the US Chess Olympiad team in 2002, 2004, 2006, 2008 and 2012 helping the team win the bronze medal in 2006 and 2008. He is also among the 3 players who participated in the recent Olympiads.

Alexander Onischuk is known as a good team player. He has won more than thirty tournaments in his professional chess career. He has worked with two world champions, Anatoly Karpov and Veselin Topalov. He was a second to Karpovin matches against Anand in 1997 and trained with him for the victorious match of 2002 against Kasparov. He also played Blitz with Karpov and won the first game with Black, then went on losing for consecutive 25 games. He worked with Veselin Topalov in the Kramnik-Topalov World Championship Match (2006).

Alexander is a very professional player and is well known for his “solid” style. His repertoire, although very good, is more predictable than the one of some of the top US players. He is now the coach of the Texas Tech Chess team. He accepted this job in 2012. He also gives online lessons at a fee of $200 per hour.   His USCF Rating is 2749 while his FIDE rating has been 2679 as of April1, 2014. He is currently the third best player in the US following Hikaru Nakamura and Gata Kamsky. He ranks fifth in America. On the global scale, he is number 67 in the world. His ratings peaked in July 2010 when he reached an all time high of 2701 and his rank moved up to #46 globally. His global rank peak has been of #26 in July of 1999 and that of 2001. In July 1999, his ratings were 2657 and in July 2001 his ratings were 2667.