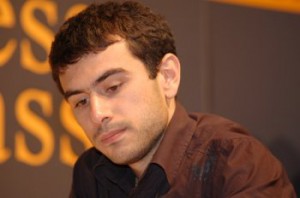 Gabriel Sargissian’s full name is ԳաբրիելՍարգսյան. He was born in Yerevan, Armenia on the 3rd of September, 1983. He plays for his home country Armenia. His grandfather taught him how to play chess when he was only six years old. He started playing as a professional quite early in his years.

He won the Under 14 World championship as his first ever title in 1996. He was also the winner of the Under 16 European Youth Chess championship in 1998. He has been playing as a professional chess player for almost two decades now. He started playing in 1996 and is still an active player as of May 2014.

He earned the title of the FIDE master (FM) in 1996. He then went on to earn the title of International Master (IM) in 1999. He earned the title of the International Grandmaster of Chess in 2002. He won the Armenian Championship titles in 2000 and then again in 2003.  He had also taken part in the championship in 2004 but was eliminated after a defeat. He also played as part of the Armenian team for the 2012 Chess Olympiad held in Istanbul, Turkey. His team won the Gold medal in that tournament. They had also previously won with him as a team member in 2006 and then again in 2008.  He also led the Armenian team to victory in the World Team Chess Championship from 2011. He also played for the Armenian team for the European Team Chess Championships in 2007, 2009 and then again in 2011. They got a silver medal in 2007 and Gabriel Sargissian got an individual Gold medal for the year 2011. These are only some of the great achievements of Gabriel Sargissian in his chess career.

He has a standard rating of 2684. His rapid ratings are of 2665 and the blitz ratings are 2689. He currently holds the 65th rank globally amongst all players and the 62nd rank amongst all active players. His national rank amongst Armenian players is #2. He ranks 50 amongst all European players while he comes up to number 49 amongst all active players. In his career he has had 387 victories which gives him a win rate of 37.65%. 494 games have ended up in a draw so his draw rate is 48.05%. He has had about 147 losses in his entire career and this gives him a loss rate of 14.3%. He has a total score of 61.67%. For more details, you can see his professional cart online.

In July 2012, Gabriel Sargissian won the Rethymno Open while previously, in 2010, the same tournament had been a draw for first place so he had to share the first position with his opponent. He has also helped to train a fellow Grandmaster in 2012 while playing in the Chicago Open. He ended up winning the $10,000 prize that year becoming the first two-time winner of the Chicago-Open. His handle on the ICC (International Chess Club) is ARM-AKIBA.