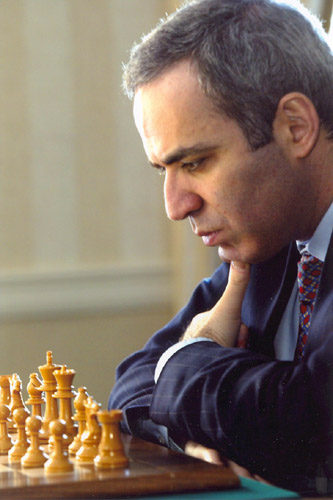 Garry Kasparov holds the crown for being the youngest chess player to win World Champions.  He was born in 1963 in Baku, Azerbaijan, to his parents Kim Weinstein who was a Russian Jewish and his mother Klara an Armenian as Garik Kimovich Weinstein.  At the age of 7, he began school at Young Pioneer Palace in Baku.  At the time, the parents were avid chess players and at one instance, he helped to solve a certain challenge that had been set by his parents. This was his first experience with this interesting game. Unfortunately, his father gave in to Leukemia leaving him under the care of his endearing mother.

At the age of 12, he took his mother’s surname Gasparyan and modified to Russian; Kasparov. He started sharpening his inborn skills of Chess at the age of 10, at Mikhail Botvinnik chess school a renowned coach Vladimir Makogonov.  He taught him how to play Tartakower System of the Queen’s Gambit Declined and Caro-Kann Defence. He became very good at the game at 13 he participated in Soviet Junior Championship that was held in Tbilisi and scored amicably. One year after this win, he participated again and this time he garnered 8 ½ of 9 points. At the time, he was under the guidance of Alexander Shakarov.

In 1978, Garry Kasparov took part in Sokolsky tournament at Minsk. He had been invited as an exception but tables turned and by the end of the game, he became a master. He has always confessed in his books and publications that this became the turning point in his life.  It was what convinced him that he was fit to take a career in chess and work towards World Championship.

His Rise in Chess

His rise to the top was phenomenal in all aspects.  Although, he was very young, he participated in yet another big event; Grandmaster tournament which was hosted in Banja Luka. He confirmed his prowess in the game by emerging with a professional rating of 2595. This was enough to place him on the envied list of finest group chess players in the world. In 1980, his wish of facing other chess players in the world arena came true when he won the World Junior Championship in Dortmund, West Germany.

At the time, it was clear to everybody that he could rub shoulders with the likes of Anatoly Karpov the then world champion who was a favorite of Russian Chess Federation. Nevertheless, he had to pass through one more bottle neck; Candidates Tournament to qualify. Garry Kasparov first faced Alexander Beliavsky, after which he emerged victorious. This was something that nobody saw it coming since Beliavsky was an enduring opponent.  He was then supposed to proceed to the next candidate Viktor Korchnoi. However, this was not going to be a smooth ride.

Political forces threatened the game which was to be held at Pasadena, California. Korchnoi had earlier defected from Russia and at the moment he was the most celebrated non-soviet player. With the increased political heat, he had no choice but to forfeit the game.  Later on, Korchnoi decided to play the game but at this time the venue would change to London. Yet again, he won the game and surprised all. His final match in Candidates Tournament was with Vassily Smyslov who was known widely for his win against Huebner. In addition, he was the 7th world champion in 1957. Vassily had not been doing well after this year. Hence, he was no challenge for the young determined chess player from Baku, who won effortlessly.

After winning the three matches that were to warrant him to participate in world championships, nothing could hold him any longer.  Garry Kasparov was to participate in a match against Anatoly Karpov. It was the most awaited game by many. It had its strengths and weaknesses. He started the competition in perfect shape winning a couple of games. He was optimistic that by the end of the day, he would be crowned as the World Champion.

He played fervently with the words of a Russian poet, backing him in each venture. He managed to pull through 17 successive draws. In the following decisive game Karpov won, but he battled back with several draws until they played game 32. He amazingly won for the very first time against the champion. His opponent had become weary which can be attributed by his age, since by the time, Anatoly was 12 years older. He won a few subsequent games to get the scores to 5-3 in favor of his opponent. FIDE closed the match prematurely and announced that it would proceed after a few months. Campomanes gave no explanation for the abrupt decision. However, it was seen as a conspiracy to stop Kasparov from winning the game. In 1985, the match was organized to involve 24 games. To crunch the title, the winner must gunner 12.5 points against the opponent. If they ended up in a draw, the prize would go with the reigning champion. This did not water down his hopes but instead Garry Kasparov viewed it as an opportunity to become a champion in chess.

He fought to the last minute and worn the World Championship at the age of 22. This made him the youngest to ever win the title. He broke the record for the youngest winner which had been under the guard of Mikhail Tal for 20 years. Mikhail had held the title after defeating Botvinnik in 1960. After this phenomenal win, he participated in several tournaments and defended his title for three times against his closest rival Karpov.

Later on, he started to battle against FIDE as Bobby Fischer had done earlier but now as part of it. He established an organization which would help to represent young players in the GrandMaster‘s Association (GMA).

His Fall Out with FIDE

His efforts against FIDE were not taken lightly by the management. Also, there was a new rival in the making for the 1993 Championship. He decided to play a match with Nigel Short the new comer outside the jurisdiction of FIDE under Professional Chess Association (PCA). This caused a big fracture that has ever been in the lineage of world champions. Both were ejected from the federation and they played their game in London where Garry Kasparov won.

After this, Karpov held the FIDE Chess World Championship whereas he remained with the title for PCA World Championship title. He defended his title against an Indian star Anand before the PCA collapsed. He tried to organize another championship under World Chess Association but this too failed.  He was stranded but BrainGames.com came to his rescue and arranged a match between him and Kramnik in 2000. He lost the match and lost the title to his opponent.

Later in 2001, he proved that he was still the best by winning Corus Chess Tournament at Wijkann Zee. A match was organized to reunite the two championships in 2003 but it did not happen until 2004. He won the Russian Championship and announced his retirement from active chess tournaments.  After retiring he was actively involved in politics and writing. He announced his interests to run for presidency in 2013, although he did not make it. He also engaged in friendly chess matches. Truly, Garry Kasparov is a chess player of all times.