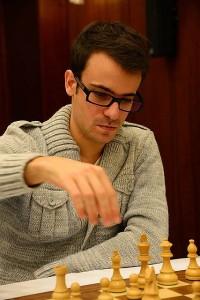 Romain Edouard is a chess player born in Pitiers in France on November 28, 1990. He is regarded as a chess grand master, which refers to a FIDE title that was awarded to him in 2009. His skills have been inspired and built by his fellow chess grandmaster, Oliveir Rene. Prior to achieving this status he has had much training and experience from tournaments and other major games that he has been involved in.

In accordance with the statistics established by the Chess Tempo he has a victory rank of 45.3%, (419) a loss of 18.3% (169) and a draw of 36.4 %( 336) out of the possible total of 924. The funny thing to note is that Romain Edouard started to play chess when he was very young, at the age of 5. In 2006, he entered in the U16 European Youth Chess Championship category and emerged as the winner. He was 15 years old then. At the age of 16, he managed to get the International Master title. Being a dedicated chess player, he is so dedicated to the game that it has defined his life.

He has attended numerous tournaments such as the following ones: Bad Wiessee2008, Zaragoza 2008 and in 2009 he won the Andora championship.  In 2010 he won the Hastings championship and in 2011 he won the Clermont Ferrand tournament.  He has had similar victories in closed events. In 2007, he won at the Grand Prix de Bordeaux event, in 2011 he won the Antwerp event and in 2012 he managed to win the Nancy event.  2012 was a good year after being named the co-champion of his country for the French Championship victory that he shared with his fellow chess players.

In recent years, namely 2013 and 2014 he has been involved in many games and he has managed good scores and positions or places. The highlight of some of the few games include:  at the end of 2013, on December 15, he played in an event known as Bundesliga where he competed against Belezky Alexander for 6 rounds and emerged as a winner. On February 22, 2014, he competed with Firman Nazar for 9 rounds and he emerged the winner.

The same year, same month on 23rd he competed with Grandelius Nils with him having black and the opponent white. There have been many more games that he has played agsinst great competitors and which have highlighted who he is in the chess game. The current news in accordance to gulf news in April 14, 2014 indicate that Romain Edouard has become the winner of the Dubai Open Championship with a score of 6.5. His follower had a score of 6 with a half mark behind him. This is an indication of the fact that he is headed for a great destiny of becoming a legend of the game in years to come.

This will be determined by the kind of support that he will yield from his trainer and the country generally. His victories have a positive image on France and he should take good advantage of that to help him become the star that he has never been. He is still young and thus it makes it easy for him to advance to higher score levels.