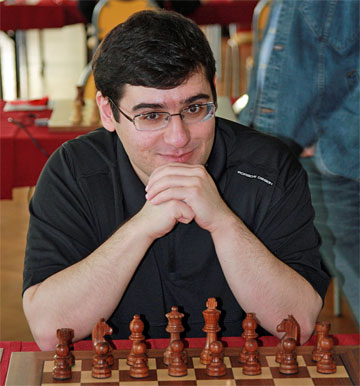 Sergei Movsesian’s full name is ՍերգեյՄովսիսյան. He was born in Tbilisi, Georgian SSR, and USSR on November 3, 1978. His grandparents were Georgian while his parents were Armenian. He had Russian education right from the start. The love for chess came in his case due to his family. His grandfather was a decent player of chess.

So he is an American born chess player and won the title of the Grandmaster (GM) in 1997. He is of American descent and he is a citizen of Slovakia. In the initial years, in the Union qualifying tournament of 1990, he shared 1-2 places with Boris Avrukh, Vovk Cormorant, Misha Kobalia and Rustam Kasimdzhanov.

He used to play for Slovakia and the Czech Republic but started playing for Armenia, his home country, again in 2011. He led the home team to Gold in 2011, during the World Team Championship and the 2012 Olympiad. He is married to Petra Krupkova, full name Júlia Kočetková, who is also a chess grandmaster.

Movsesian is the top player in Slovakia and an active chess player in the European chess leagues. He has been a part of them since the year 2000. He won many titles from 2000 to 2008 including Gold, Silver for the team while also collecting Gold, Silver and Bronze for himself.  His unique style of playing openings outside the mainstream (for example the variety of anti-Sicilian lines) is widely known. He also has a keen eye for tactics. He is also widely known for winning the Corus B tournament in 2008 and 2012 Biel Chess Festival Masters.

His achievements came early in his career. He became the International Master in 1995 and then went on to become the Grandmaster in 1997. He then won the Czech Championship of 1978 and the Slovakian Championships of 2002 and 2007. He has also won several national club championships in various countries including Slovakia, Greece and French.  Sergei Movsesian is vastly known and recognized as a team player. According to him, he has a spontaneous Buddhist approach to life which gives him a spontaneous outlook on life.