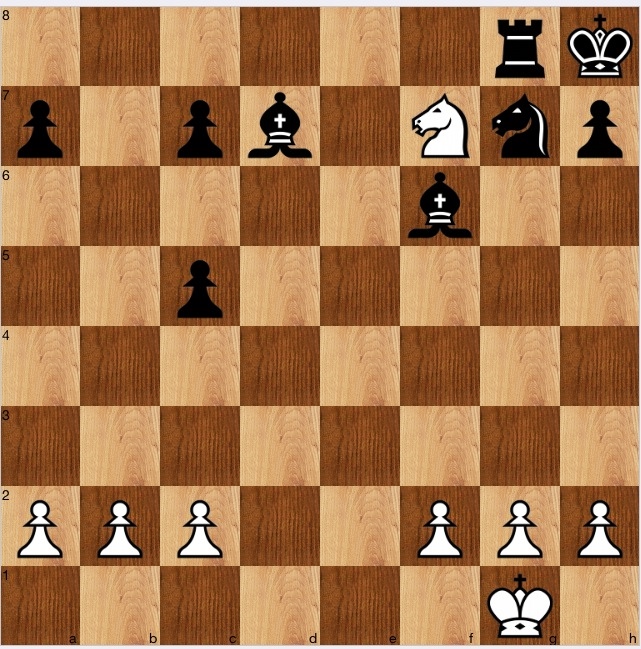 The term ‘smothered mate’ is commonly used to define a position unto where the king is trapped beyond his own pieces rendering him motionless as he is forced to relinquish the game, forked by and enemy knight. This phenomenon most commonly takes place in the corner of the chessboard as it is a much less delicate process to push the king into a suicidal spot with his pieces rather than surrounding him all with it, taking a longer time and a more complex cognitive blueprint for the execution. The occurrence of such usually includes the need of sacrifice of a substantially powerful piece on the enemy side which would either compel or maneuver the player into placing his pieces all around his king as it is rather unlikely that a player would want to surround his own king with the knowledge that it would lead to utter defeat.

Taking the just said paradigm, we can easily compare the game of chess to our own daily lives. According to popular anecdotes, the chessboard represents the very essence of life itself whereas we as humans are defined as the pieces on the game played. Without any thoughts of offsetting such statements, we would use the illustration given.

Similar to the game of chess, it is paramount that you possess the ability to apprehend the future and to plot the layout of your strategy for success whilst being shrewd enough to look beyond the bounds of your opponent’s intellect. Commonly, failure to plan, the making of blunders, over-confidence, lack of intrinsic knowledge about the game and many other factors may ultimately lead to utter defeat of the overall game.

But as an antithesis to chess, where it is often said and misunderstood that once the game ends, all else ends. Life itself, even after a checkmate be it a smother mate, a suffocation mate, a swallow’s-tail mate or any other patterns that you are confronted with, doesn’t actually ends! Your soul do not get terminated on the spot! With the exception of a suicide which is also known as a resignation of the game. Despite the fact that you are faced with the illusion of immobility in your life (analogous to the incapacitation you are faced in chess during a checkmate) such as the loss of a loved one, the loss of a job, the inability to generate sufficient finance, or the pain of emotional burden in your career; it is an enlightenment to discern the inequality that in life, we were never actually confined to the fundamental guidelines of the game of chess, but instead are free of the arbitrary control throughout our own game.

Consequently, always be wary and not take things for granted, both in the game of chess and in the entity of life. Above all else, in life, always comprehend the fact that you are always able to step out of the board itself when you are at a loss of moves or maybe introduce new pieces into the game in times of urgent help. On the lattermost extreme, you would never be smothered again.