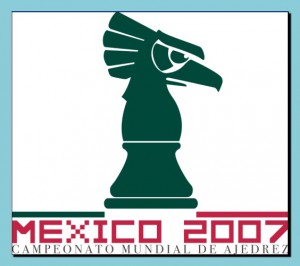 The world championship 2007 was played in Mexico from the 12th to the 30th of September. This game was organized to create a new world champion after two years of Vladimir Kramnik sitting on the throne of grandmaster. Simultaneously, this was also a tournament that saw old champions come to defend their name and the rise of an unexpected winner at the end of the match season.

Just like the 2005 tournament, the 2007 comeback also took a double round robin approach in a bid to get some of the grandmaster who refused to play in such system to participate. The 2007 round robin system became a success, and about two grandmasters showed up to contest or defend their seat. One the two was Rustam Kasimdzhanov, who had taken the world by storm in 2004, and the other was Vladimir Kramnik who was the then current champion.

About 8players graced the world championship 2007. Those in attendance were namely Vladimir Kramnik a Russian champion, Peter Svilder also from Russia, Alexander Morozevich from Russia, Peter Leko from Hungary, Alexander Grischuk from Russia, Levon Aronian an Armenian, Boris Gelfand from Israel and lastly Viswanathan Anand from India. About three players (Vladimir, Svidler and Anand) had qualified in the FIDE World Chess Championship of 2008 while the rest had come in as qualifiers from the Candidates tournament.

Everyone had the right credential to participate in this 2007 game which was considered an unusual event because the winning was determined by a tournament instead of a match. But a cash prize of $1.3 was enough incentive to bring both the grandmaster and the rookies to the match to face it off. Vladimir this time obliged though he stated he would have preferred a match over a tournament, nevertheless he recognized the event as a world championship. In

The world championship 2007 had a total of 29 rounds by the end of September 30th. In the first 13 rounds, the results were mainly a draw in all right players with the games ending with famous moves like the Queen’s Indian and the Petrov. In the second phase thinks got a bit more serious and the first win was a 1-0 between Morozevich and Svidler. In the third phase, Aronian beat Leko 1-0 with a Benoni (A33). The other games ended up in draws

By the time the game was reaching the 6th phase (round 6 to 19) it was getting clear which player was reaching for the championship. The new Indian player Viswanathan Anand was showing high skill in the game and only lost one round to Aronian by a Queen’s Gambit Defense. In the proceeding matches, he came out in draws while beating the opponent in some. By the end of the tournament, he had garnered a rating of 2792 which put him first place and the new grandmaster of the World Championship 2007.