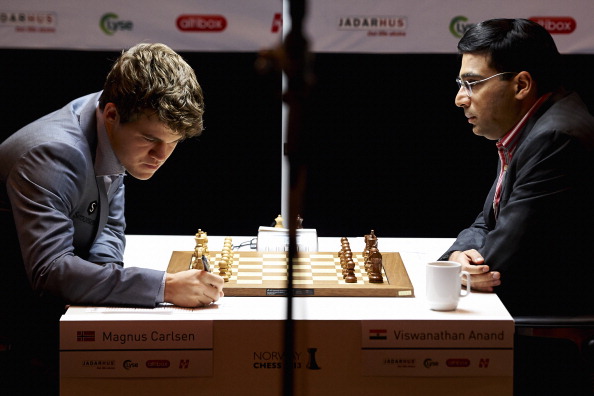 In the World Championship 2013 for grandmaster chess, the renowned guru Viswanathan Anand was competing yet against another opponent Magnus Carlsen. Anand agreed to a match in Chennal region (India) scheduled from the 9th to the 22nd of November. With two gentlemen showing off remarkable chess records, the question was whether Magnus would be able to take down Anand’s empire.

The contrast between the two men wasn’t that big in terms of achievements. Anand had just won the title the previous year against a very aggressive opponent Gelfand Boris. He had shown remarkable plays even in the years before by thwarting out grandmaster after grandmaster; thus it was normal to bet that he was definitely going to take out this new threat. The Norwegian on the other side came with an equally remarkable resume. By 13 years of age he had already achieved the title of grandmaster and his Elo rating was an all time high, one that Anand had never reached in his chess history.

The match was organized at Hyatt Regency Hotel in which each player was entitled to arrive with their own helps or seconds. On the Anand team were Surya Ganguly, Krishkan Sasikiran, Radoslaw Wojtaszek, Peter leko and Sandipan Chanda. Carlsen’s team comprised of Ian Nepomniachtchi, Ludvig Hammer and Laurent Fressinet.  Anand’s strong advisor Peter Nielsen could not come to his aide this time since he had previously aided Carlsen in a game as well. Out of the mutual friendship between the three gentlemen, it was best if he sat this one out.

Round one of the game was finally in and both players were heavy on each other with opening moves. Carlsen was seen to use a quite approach which though he miscalculated and offered his opponent some redemption. After 16 moves the match fell into a threefold repetition and Carlsen agreed to Anand’s draw call. The rules for the threefold repetition were different this time is as the draw earned both players half a point as opposed to a null score in the standard chess board.

On round two, Anand’s suggested a king’s pawn strategic opponent to which his opponent responded with a Caro-Kann defense. This squared things out and Anand opted to castle his queenside which the led off to a knight tradeoff between both players and Carlsen found a leeway to advance his queen. Another tradeoff happed; this was between queens and Anand shocked the crowd by agreeing to the trade off though he could have easily played a more aggressive hand to counter this move. And the result? Another draw between the two gentlemen.

By the next two rounds, the two grandmasters were still drawing until the 5th round when Anand made another fatal mistake which saw him lose his first round to Carlsen. As one would expect him to make a comeback like he used to whenever he was defeated, Carlsen once more squashed him in the 6th round. Anand managed to keep his head up with a draw in the 7th and 8th game, however he was again miserably defeated in the 9th round. The 10th round didn’t even have to happen, as clearly a new chess champion had been born.