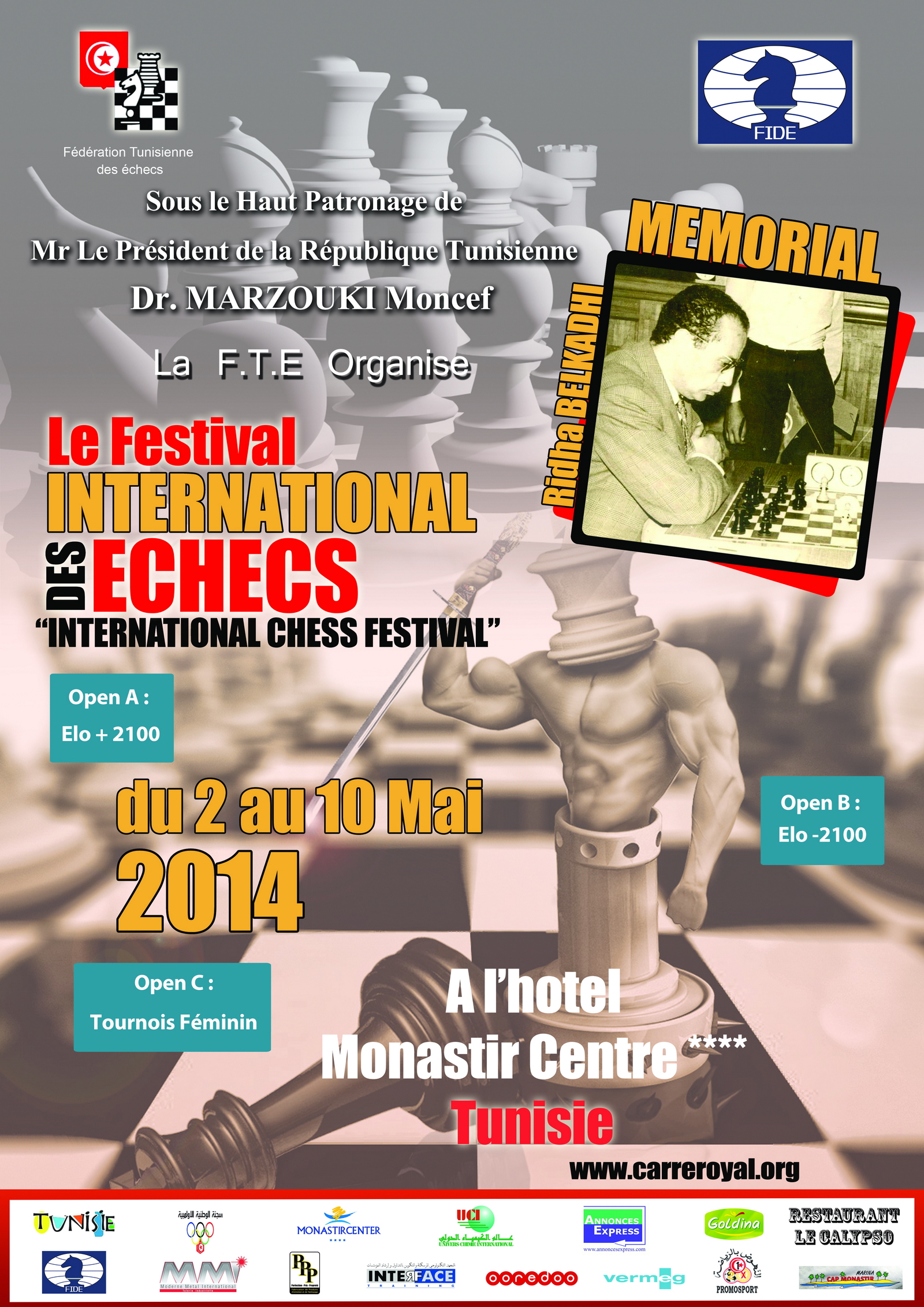 The Tunisian Chess Federation is pleased and honoured to organize with the important support of The international chess federation FIDE the chess festival “Ridha Belkadhi Memorial”.

This festival will take place in Monastir center hotels (4 stars) from the 2nd  to the 10th of May 2014 in the beautiful city of Monastir.

The marvelous city of Monastir

A view of the “corniche” of monastir

A Real Big international “rendez-vous” of the noble sport of the mind organized in honor and memory of our beloved and recently deceased father of the tunisian chess family, Mr Mohamed Ridha Belkadhi.

This gentleman was one of the most passionate and dedicated pioneers of the tunisian, arab and african chess.

Mr belkadhi was a very talented player gifted with an immense tactical sense that made him clinch the first Arab and African international master title, he was unquestionably the greatest Tunisian, Arab and African player for more than a decade.

His incredible strength and immense energy and talent over the board did not prevent him from shining in other fields, he was a remarquable leader and occupied lots of very delicate and important positions of high responsibility in several national and international organizations.

All those who knew him will keep in their minds the image of a unique gentleman, generous, kind, competent, educated, creative, hard worker and of course an unconditional lover of our noble mind sport.

This chess festival is our way to thank and honor this great man who has dedicated most of his life to his great passion, chess .

May god accept you in his heavens,

The inauguration of this festival will be marked by the honorable presence of very important and chess supporting international personalities:

These great personalities will honor us by their presence and by giving small speeches on the  opening ceremony wich will be held on the “Monastir center” hotel on the 3rd of Mai 2014.

The chess Festival memorial Belkadhi will orchestrate the presence of more than a hundred players of different nationalities including a lot of experienced international Grand Masters, International Masters and titled players coming from over than thirty different countries from all over the world that will cross swords over the board with our finest and most talented Tunisian elite players.

This great chess festival will include three international open tournaments :

These three open tournaments will be played according to the Swiss system in nine rounds each and with a time control of  90 minutes plus 30 seconds increment per move from the first move.

A large team of international and FIDE arbiters will be mobilized and will work under the control of the experienced international arbiter and chief arbiter of the tournament Mr Abdelkader Chaabani .

This chess festival will have a substancial prize fund reaching 10,000 U.S. dollars which will be distributed to the various award winners of the three tournaments.