The FIDE Women World Rapid Championship 2014 continued today with rounds 6-10 being played at the Ugra Chess Academy in Khanty-Mansiysk.

After the exciting battles and many changes on the top of the standings, at the end of the day the defending rapid champion Antoaneta Stefanova, Alexandra Kosteniuk and Kateryna Lagno are joint leaders with 7,0/10 points each.

Olga Girya the big surprise of the Grand prix tournament continues in form and shares the joint second place with, Anna Muzychuk, Marina Guseva half a point behind the leading pack.

The event continues tomorrow at 3pm local time with the final five rounds.

In the 6th round Alexandra Kosteniuk beat yesterdays sole leader Tatiana Kosintseva to overtake her on the top of the crosstable with 5,5/6 points. The other top game between Kateryna Lagno and Mariya Muzichuk was drawn and the Ukrainian players remained on the shared second place. 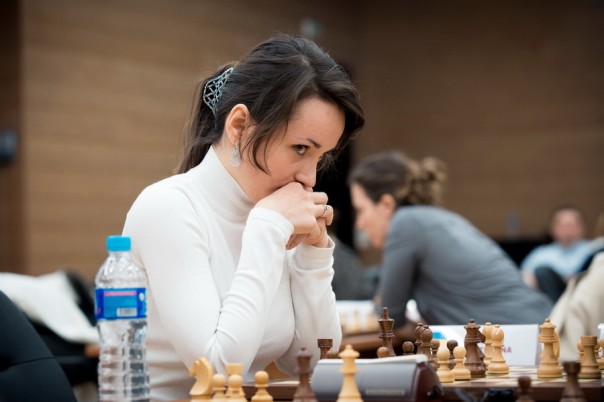 Irina Krush and Anna Muzychuk made a breakthrough by beating Zhao Xue and Elisabeth Paehtz respectively.

In round 7 Kosteniuk continued her winning row by defeating Mariya Muzichuk with black pieces. Kosintseva fought back and pulled a nice win against Anna Ushenina to keep the close distance behind the leader.

In round 8 Kosteniuk’s winning streak was stopped by Anna Muzychuk that avenged her sister’s loss. Kosintseva was in position to regain the lead, but she spoiled the advantage and even lost to Olga Girya.

Kosteniuk remained on the top, while Girya, Muzychuk and defending champion Antoaneta Stefanova caught the group on the shard second place. 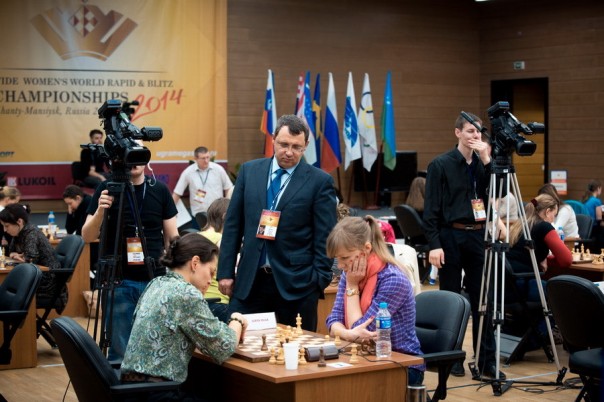 In round 9 Kosteniuk lost second game in a row, against Girya, who then moved into sole lead with 6,5/9 points. Kosintseva escaped against Anna Muzychuk after a huge time trouble where the rook endgame was played on increment.

Irina Krush surged ahead with an easy win against Pia Cramling.

A new group of leaders emerged after the 10th round. Girya’s opening experiment backfired and Lagno routinely converted the advantage.

Kosteniuk run into big trouble with white against Krush, but she fought her way back into the game and later Krush blundered horribly to hand the victory to the Russian.

Stefanova was under huge pressure from Kosintseva, but after surviving the initial onslaught black launched a strong counterattack that netted her two pieces for a rook. The rest of the game was only a matter of technique.

Sisters Anna and Mariya Muzychuk shared the point on board four.

34 female players from 13 countries are competing for the title and prize fund of $50,000.