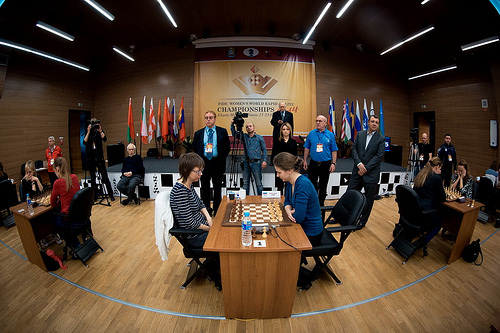 The Women’s World Blitz Championship started today in Khanty-Mansiysk. 32 players from 14 countries are competing for the championship title in the quickest chess discipline.

Together with the speed chess Khanty-Mansiysk welcomes a new wave of winter – snow, wind, snowstorm… However, the tournament participants are not worried about the weather. The youngest player Alexandra Goryachkina confessed that she feels perfectly at home, because such weather is a norm for her native Salekhard.

A symbolic first move in the game between Anna Muzychuk (Slovenia) and Pia Cramling (Sweden) was made by Vassily Filipenko – major of Khanty-Mansiysk and Ugra Chess Federation President. Afterwards he said that blitz is in his opinion the most thrilling chess format. “I often play speed chess, – added Mr Filipenko, – and it is something completely different to classical chess”.

He also expressed his pleasure about the local player Olga Girya’s success in the Grand Prix event and in the World Rapid Championship. “She is clearly progressing. Also home soil, loyal spectators and trainers of our academy played certain role in her result”, – said Mr Filipenko.

The tournament will continue until April 28th. It’s a Swiss system, 15 double-rounds tournament (each player has two games with alternate colors in each round). The time control is 3 minutes plus 2 seconds per each move.

On the first day five rounds with ten games were played. Anna Muzychuk from Slovenia dominated the tournament arena, taking a convincing lead with 9,0/10 points, a one and half points ahead of the nearest followers.

Antoaneta Stefanova recovered after the round two loss to Tatiana Kosintseva and played a string of good games to reach the 2nd place with 7,5/10 points.

Dzagnidze, Harika and defending champion Valentina Gunina (Russia) are sharing the third place with 7,0 points each.

The next 6th round will see the clash A.Muzychuk-Stefanova on the top board.